We have carried the entire Brecks line since 2003. Some of the lures we have are discontinued and no longer available. Quantities are limited.

I am often asked how I got into the fishing lure business. I can answer that very quickly. The Mooselook Wobbler is our very favorite lure and it became very difficult to find it. Thankfully now I will never be out of lures. 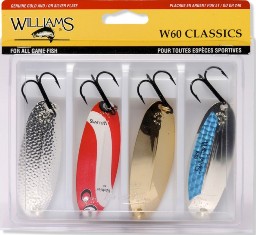 The Williams company was founded by the classic Williams Wabler® developed by brothers A.D. and Malcolm Williams at the turn of the 20th century. Having returned from a successful gold strike in the Canadian Yukon during the 1898 gold rush, the brothers eventually settled in the Niagara Falls region of Ontario Canada and New York in the United States. Being avid anglers they experimented with different designs and, as near as can be ascertained, developed the Wabler about 1916. Their main commerce being precious metals refining, it was only natural that they apply their trade to the lure they developed. Since the first Wabler was produced and still to this day, every Williams lure is finished in genuine silver and/or 24 karat gold plate.

The Mooselook, a favorite for trout and salmon in both the northeastern United States and Canada has been produced in the Brecks facilities as of fall of 2002. The proven shape, weight and action of the Mooselook will be carefully maintained. Plated finishes will be improved upon by our state of the art facility, Williams Recognition, which also produces the Williams lure finishes renown for their quality and durability. Copper and brass finishes will be further protected by a plated and baked on clear outer coat which remains clear indefinitely and also renders these lures basically tarnish proof and salt water resistant. Painted finishes will be automotive powder coat applications with sharp clear contrasting accents.

In 2013, Brecks acquired the Savant spoon company of Andover, Massachusetts. The Savant lures are recognised for their proven actions and effectiveness in the water.

The Williams, Mooselook, Savant and Lake Clear Wabbler fishing lures are made in North America by angler for anglers.